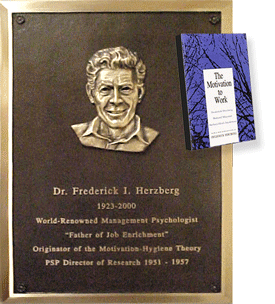 Returning to the foundations of current theory can provide strategies to address today’s challenges. In the January 2003 issue, recognizing the continuing critical challenge of employee motivation, the Harvard Business Review printed for the third-time Dr. Frederick Herzberg’s 1968 classic, “One More Time: How Do You Motivate Employees?” Even today this is the HBR’s most frequently requested article reprint.

Dr. Herzberg conducted his ground- breaking research while employed as PSP’s Director of Research. He challenged assumptions that workers are primarily motivated by money and other tangible benefits.  He found instead that workers are motivated by achieving something in their jobs, being responsible for their job tasks and being able to work with minimal supervision.

In his research at PSP, Herzberg found that what makes people satisfied and motivated at work is much different from what makes them dissatisfied. Satisfaction and motivation come from the actual performance of the work. Herzberg’s work at PSP led to greater emphasis on employee job fit for both short-term job duties and long-term work expectations.  PSP’s research today Herzberg’s emphasis on job enrichment led eventually to today’s emphasis on multiskilled jobs and self-directed workforces.   According to HBR, his work helped lead to a major re-evaluation of how jobs are designed and how workers are managed, and influenced a generation of scholars and managers.   Dr. Herzberg’s research described the importance of work behaviors and job interests to work performance, positive worker attitudes and job satisfaction. Herzberg’s research while at PSP was described in his first two books, Job Attitudes and The Motivation to Work.

Dr. Herzberg was PSP’s Director of Research from 1951 until 1957.   During this time, support for a study of work motivation came from a grant donated by the Buhl Foundation along with matching funds from a number of PSP client companies including Alcoa, Duquesne Light, Gulf Oil, J&L Steel, Mellon Bank, U.S. Steel and others.   Dr. Herzberg interviewed workers from Pittsburgh and national corporations, and conducted research that led to his now famous Two Factor Motivation Theory describing what he called “hygiene factors” (salary, benefits, working conditions) and motivators (challenge, achievement, responsibility, recognition).

Herzberg’s work at PSP led to greater emphasis on employee job fit for both short-term job duties and long-term work expectations.  PSP’s research today continues to find that different people require different motivators and, as Herzberg emphasized, it is important to pay attention to how workers feel about their jobs in order to understand their work motivators and job behaviors.   Today, more than ever, workers crave both job security and increased meaning in their work lives, with the desire to achieve work/ life balance as part of this aspiration. Workers are ever more demanding in their job and career expectations.   To adapt, companies need to provide opportunities for people to achieve—so they will be motivated in their work.

Sign up to get practical tips and newsletters delivered to your inbox.